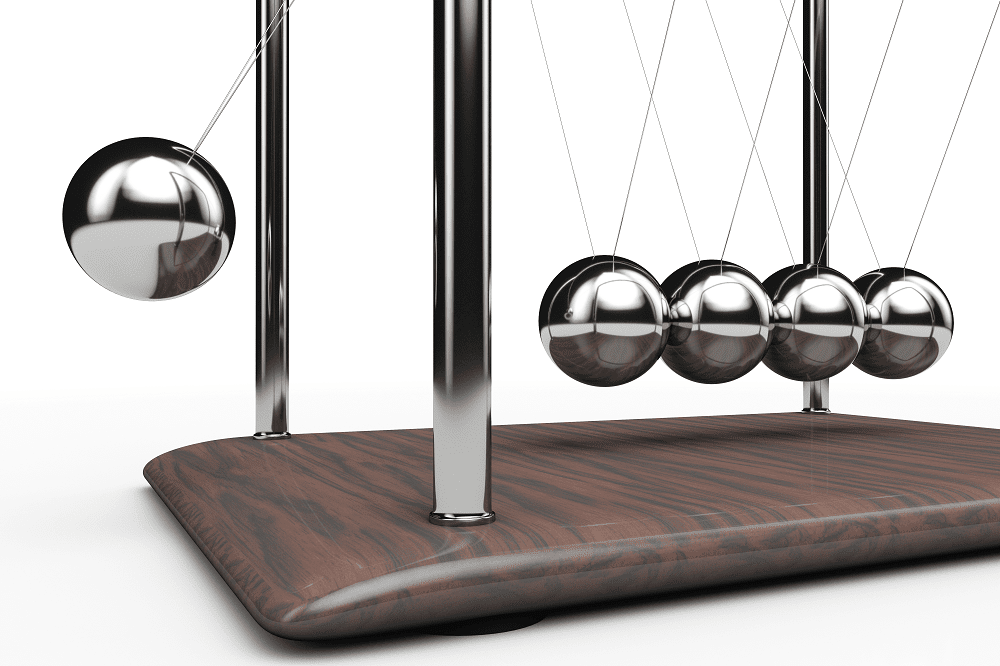 We all know what intertia is. Whether or not your mind immediately brings up an image of Sir Isaac Newton, you have certainly heard of Newton’s first law of motion: “An object at rest stays at rest and an object in motion stays in motion with the same speed and in the same direction unless acted upon by an external net force.”

For humans, it basically means that we tend to just keep doing what we’re doing. Good or bad. If we eat too much, we generally keep eating too much. If we exercise every day, we tend to continue exercising every day.

So, when we’re talking about good habits, inertia is a good thing. If you show up for work every day and keep doing your best, you will get better – and be more successful. It simply will happen. You still have to do the work every day. But the good outcome will ultimately result.

But when we talk about bad habits, the same logic applies. If you keep hanging onto a dead-end job where you are treated poorly and not rewarded for your work . . . well, you’ll continue to be treated poorly with no reward in sight.

Here’s the really bad news (which you probably already know): Even if you escape the intertia of a bad situation, there’s a strange human tendency to go back. We even have a phrase for it. “The devil you know.” There’s something oddly comfortable about a bad job, a bad relationship, or a bad habit.

A net force is simply the combination of all the forces on an object. In the example of a bad job, for example, the forces include your wages, your benefits, the location, your co-workers, your boss, the profession as a whole, and so forth. When you think about leaving a bad boss, you hope to find a better boss, but it might be at a lower wage, farther from home, or with less desirable benefits. The net force is YOUR calculation of how well these things balance each other.

The best thing about intertia in your life is that you can let things “cruise” along for awhile, as long as they’re headed in the right direction. One little argument won’t ruin a relationship; it will get back on track and continue as it was. One bad grade won’t ruin your degree. One mistake won’t destroy your career.

The worst thing about interia is that we tend to trick ourselves into believing that all those forces balanced so perfectly to keep us on track are out of our control. We cling to the concept that these things are external to us. This gives us the convenient excuse that it’s not our fault if we continue along the wrong path year after year.

But all those forces are NOT outside our control. They are external to our situation, but almost all of the forces in our life are based on decisions we made, and continue to make (and reinforce) day after day. But, most of the time, our assessment of these things is based on fear and emotions, not on an objective evaluation of the situation.

How do we know this? Think about the last time a major change was thrust upon you. Perhaps you got laid off, your job moved to a new location, or a global pandemic suddenly required you to work from home and order food delivered instead of going out to restaurants. You adapted. And you probably adapted pretty well and pretty fast. Maybe it wasn’t perfect, but it was not as bad as you might have feared if you were given the chance to think about it in advance.

Humans are amazingly resilient. I can’t count how many people I’ve met who look back on losing a job as one of the best things that ever happened to them. In my own case, I resigned from the last “real” job I had. But I put it off ten months to make sure everything was just right before I did so!

We often hear that people hate change. I never agree with that assessment unless it has a caveat: People hate change that’s thrust upon them. But they love change that they iniate! The change from single to married is a great example. You can cruise along being happily single (or unhappily single) until you take action readjust the net force on the direction you’re heading.

If you want to make some positive changes in direction, start by taking ownership of the forces that keep you on the heading you’re on. Ultimate, almost all of these forces are within your control. They are external to your situation, but not to you as an individual.

As Jim Rohn says, “If you don’t like where your are, change it! You’re not a tree.”